The Metaverse: the next big change which raises multiple interests 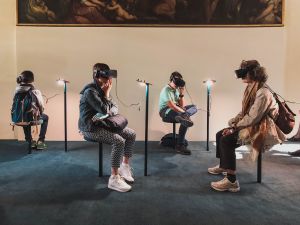 This week, Facebook indicated its decision to foster 10,000 new jobs in the EU committed into building the Metaverse, which has became one of its big priorities.

But what is Metaverse?

That means that unlike current VR, which is mostly limited to gaming, this virtual world would allow you to connect with all sorts of digital environments such as work, play, concerts, cinema trips - or just hanging out.

Even if its definition is still pretty indefinite, the incorporation of an avatar - a representation of yourself - as you use it is probably one of its main components.

Metaverse is suddenly becoming a main concern for investors and big tech firms, who don’t want to miss this promising opportunity, which might become “the future of the internet.”

With the constant advancements in VR gaming, the interests are rising as testify the involvement of Facebook

Indeed, while they were improving their Oculus headsets, making them more competitive on the market, they also kept developing VR apps for social hangouts and for the workplace, which will include connections with reality.

However, Facebook emphasised  the fact it has the desire to collaborate; being aware than “the Metaverse "won't be built overnight by a single company". Consequently the firm has invested “ $50m (£36.3m) in funding non-profit groups to help build the Metaverse responsibly.

Nethertheless, as Facebook already know it, the Metaverse idea is still in an early stage, targeted by multiple tech giants, which will take another 10 to 15 years to come to an end.